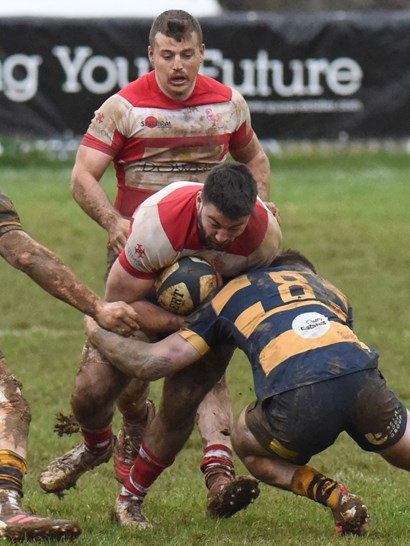 Well, that was a lovely day out. A bitterly cold day with a strong wind blowing diagonally across the pitch at Sevenoaks. Not even the warm glow of a win to negate the chill.

Sevenoaks deserved their win - no doubt about that and well done. Considering the conditions both sides played some really good rugby - defences were magnificent with much positive, hard and sportsmanlike play.

An early foray into the Dorking 22 was responded to in kind with an excellent attack up the windward side of the pitch with some great handling to release Fred Dalton who was steaming to the line - surely an opening try - only to be cut down with one of the best defensive tackles I can remember. Clearly this was going to be a game of intensive defensive action.

And so it proved. The Oaks had one, perhaps two opportunities that they themselves failed to capitalise on, otherwise Dorking’s defence held firm going into the teeth of the wind. There were some flashes of attacking genius - Fraser Mosely was on fire at times and Ollie Rathbone always a threatening presence until sadly a tweaked hamstring forced an early retirement. A penalty from

skipper Matt Noble with a near miss just before half-time saw Dorking end the half 0-3 up and with the wind in their favour second half.

Third quarter much of the same with a Matt noble penalty to take Dorking 0-6 up. One felt at this stage that Dorking were probably going to grind this out with few try scoring opportunities coming either side’s way. A charged-down Dorking kick ended any complacency when the Sevenoaks player, with skilful footwork, kept control to touch down in the corner.

Unconverted and the score stood at 5-6. Dorking really only had two chances to draw further ahead; a penalty at 15 metres out was kicked to the corner - the resulting line-out lost but knocked-on by Sevenoaks resulting in the scrum that perhaps would always have been the safer option.

Scrum 5 to Dorking and game on - ball won and at Dorking 8 Tyler Norwood’s feet, picked up and then Tyler tackled by the Sevenoaks open side followed by the blind side and driven back 7 metres. Magnificent defence by Sevenoaks. Awesome to watch. Also illegal. Both Sevenoaks flankers having detached from the scrum about an hour earlier. Dorking had one further chance down the right wing that produced no points but a yellow to a Sevenoaks player for a high tackle. The game still seemed to be in Dorking's gift and perhaps the spirit of Christmas arrived early. Our line-out failed to deliver when it counted most - tricky conditions I know, and Sevenoaks rued chances lost to malfunctions with theirs, but in those dying minutes it simply had to deliver.

I know this is General Sir Harry Hindsight speaking here, but tactically we should not have played keep-ball in the last few minutes for two very good reasons; firstly we were playing on part of the pitch right alongside the very vociferous home crowd (even Saint Nigel may have been swayed by the forcefulness and erudition of the arguments put forward) and secondly with the backs we have, we really should have trusted them to pin Sevenoaks back into their 22 with the wind in our favour. We chose to grind it out up-front with a referee who’s control of the breakdown made it a lottery (from which, in fairness, we also had at time profited).

And lo, it came to pass, the good Lord awarded Sevenoaks not one, not two, but three penalties ever closer to the Dorking posts for the inevitable penalty goal in the last play of the match to take the final score to 8-6. Bugger.

Can’t wait to give dear old Oaks a very, very warm welcome to the Big Field in 2022

“Really dissapointing result for us today in a game that was really well fought by both sides.

I’m pleased with the physicallity and the application from the Dorking players today showing great resillience on a challenging pitch with attrocious weather. We got 1 point away from home against a good side.

There is no blame to be placed on anyone, we lost the game to a very passionate and hungry home team. All the credit to them for doing so.