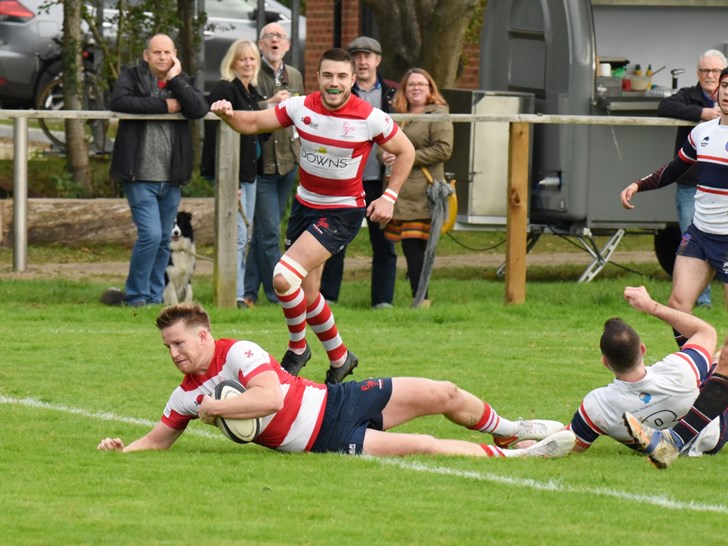 By Jim Evans
Dorking RFC 71 - 0 CS Stags 1863
What a day!
Perfect weather at The Big Field meant that conditions were ideal for 3 home games; the 1st XV hosted CS Stags (‘CS’), the A XV Horsham and Ex A Farnham. Aligned with this was an Oktoberfest themed day, which meant that all the raw materials were there for a memorable day’s entertainment in DRFC’s 100th year.
The 1st XV have had a strong start to the season, but there has been a lingering feeling that there was still more to come from this team if some of the frustrating errors of past matches could be irradiated. And so it proved to be, an outstanding performance in all aspects of the game meant that Dorking dominated the match to run out winners 71-0.
Playing towards Boxhill, Dorking started with a bang. After 4 mins, some great interplay between the backs and forwards ended with Joel Grant crashing over for a try, which was converted by Matt, 7-0.
While the core of the back line has familiar faces, the addition of Cam Cowell at 15 has meant an added zip this season and it is clear the understanding between the players is improving match by match. There is a natural desire to attack from our own half and space is often created by skillful passing, in particular, the long flat pass to supporting players out wide. Combine this with some real pace on the wings, and the result is some great rugby to watch for the DRFC faithful on the sidelines.
After a speculative chip through by CS, Cam Cowell gathered and immediately counter attacked, delivering a long pass out to Ryan, who made good yards and gave a lovely pass to Ollie Rathbone, who showed show real pace to score in the corner. Matt stepped up to knock over an excellent conversion: 14-0 after 13mins.
Dorking now cranked up the pace. Lines of running and accurate offloads meant a quick fire brace of tries from Ryan, with one converted by Matt to take the score to 26-0 after 20 mins.
To make matters worse for CS, their scrabbling defence began to get on the wrong side of the referee, and the No8 was yellow carded for slowing down the ball at the break down. Dorking kicked to the corner and a neatly executed catch and drive saw Johnny Ellis emerge as the bonus point try scorer. Matt converted, 33-0 with 25 mins gone.
The backs now really made good use of the steady supply from the forwards with 2 more tries before the break; one from the evergreen Fraser Macdonald and a real gem from Toby Macrae after a well executed chip and chase from Matt. Both were converted and, at the break, the score was 47-0 to Dorking.
Charlie Connor replaced Johnny Ellis for the start of the 2nd half.
CS now dug deep and were certainly more competitive in their defence and it took 15 mins for Dorking to add to the score, when Ollie Rathbone ran in a try off first phase ball from the lineout. Matt converted from the touch line: 54-0 with 13 mins gone. Finn Osbourne and Ryan Jeffrey were replace by Tyler Norwood and Jonny Aiken.
Moving into the final quarter, gaps now started to appear and Toby again showed his pace to score. Matt duly converted: 61-0, 30 mins gone.
Ryan returned to the fray in place of Fraser and was in the right place to get his hat trick of tries; a missed conversion left the score at 66-0.
With a few minutes left, it was all Dorking, and Toby Macrae completed the rout with his own hat trick try. The conversion was missed and the final score was 71-0.
A fine display of rugby skills, in particular, the set piece went well and the backs’ lines of running and support play were impressive.
Next week, Dorking are away to Havant on their artificial pitch. Havant have made a good return to level 5 this season and will provide a stern test for Dorking
Coach Armand Roux commented:

''Credit to the team for really turning up, sticking to structure and playing some flowing rugby today. I felt we allowed them to get back into the game in that middle part of the 2nd half, but all in all we have to be pleased with scoring 71 points. We have also been working really hard on our defensive system and application in the contact zone. The players really made sure we stick to them which was pleasing to see. Best defensive record in the league so we have to be pleased with that. We know we have only played the teams that seem to be stuggling this year, so our first real test will be away against Havant next week.''

The A XV had a good win over Horsham and the Ex A had an entertaining game, but lost to visitors Farnham 10-48.

The Oktoberfest themed activities continued well into the night with, I am sure, many a tale to tell. Your correspondent was sent home for an early bath at around 6.30pm so is unable to provide any further details. Congratulations to the organisers and thank you for making it a as memorable day off the pitch as it was on it.
Team: Tom Bristow, Jonny Ellis, James Catton, Will Galbraith, Jasper King, Joel Grant, Finn Osborne, Fred Dalton, Henry Smith, Matt Noble, Toby Macrae, Fraser MacDonald, Ryan Jeffrey, Ollie Rathbone, Cam Cowell. Charlie Connor, Tyler Norwood, Jonny Aiken
Tweet
Tweets by @DorkingRugby