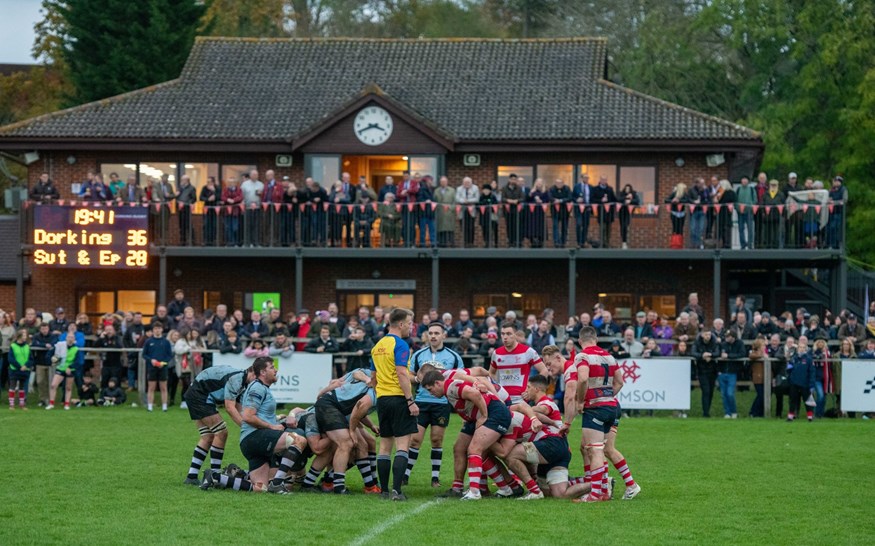 It was precisely one hundred years and one day since the Dorking 1st (and only) XV trotted out on to the field at Meadowbank for their inaugural game. How things have changed in the intervening years. We like to think that the ‘Founding Fathers’ would be impressed with the set up at the Big Field today, note the many changes but also note the familiar spirit of conviviality, team work, respect enjoyment and discipline which are the cornerstones of today’s game.

It was an early start for the Dorking Faithful, with Sir Michael Pickard, John Case and Chrissy Clatworthy officially naming the Pavilion ‘The Alan Clatworthy Pavilion’, in honour of the man who was the guiding force at the Club for over 40 years. Alan, or ‘Big Al’ as he was to his many friends, served as Club President from 1963 to 2008, and is believed to be the longest serving President in the history of the game.

Many of the club’s elder statesmen and their partners along with distinguished guests Sir Paul Beresford MP, Helyn Clack, Leader of Surrey County Council, Paul Astbury of the RFU plus our friends from Sutton & Epsom sat down somewhat earlier than usual for Sizzling Sam’s final pre match lunch, Sam having moved the club’s fayre on from the dark days of the sausage casserole to the ‘slow cooked blade of beef’ on offer today. And so, after the reminisces, the toasts and the speeches attention turned to the main event of the day. Sutton & Epsom had upset the formbook the previous weekend with a narrow home victory over league leaders Wimbledon, and with Dorking taking over the top spot as a result the visitors were very much up for a repeat performance.

Dorking chose to receive the ball and play downhill in the first half, but a despite a clean catch and good clearance of the ball found themselves on the wrong end of a penalty call for offside. Sutton retained the ball and pressurised the Dorking defence with a series of pick and drives, finally creating space for the no 9 to dive over for the first try of the afternoon. With an easy conversion it was Dorking 0- 7 Sutton with barely a few minutes on the clock.

An uncharacteristically nervy few minutes saw the Red & Whites advancing slowly into the Sutton half when a break down the right had Fred Dalton suddenly in the clear with Cam Cowell in support out wide. A perfectly timed pass, which the entire Sutton contingent swore was forward (but Sir disagreed) and Cam collected to dot down in the corner for the first Dorking score. Conversion missed, Dorking 5 – 7 Sutton.

A clean catch at the re start and Dorking spun the ball out wide to the left again, and barely four minutes after the first try, Jonny Aiken was in, again in the corner for the second, this time converted. Dorking 12 – 7 Sutton. And in a carbon copy of the move, 3 minutes later Jonny was in for his second, again converted taking the score out to Dorking 19 – 7 Sutton. With the forwards securing good fast ball at the breakdown and Captain Noble pulling the strings in the backs, a towering cross field kick 4 minutes later was collected by Ryan Jeffery, who ran in Dorking’s fourth (and bonus point) try as it looked like a cricket score might be in the offing. Conversion missed, Dorking 24 – 7 Sutton. But Sutton remain battle hardened from their National 2 exploits and having clearly received the metaphorical smelling salts as they congregated under the posts for the conversion, impressively fought their way back into the game. A series of strong pick and drives up the centre of the pitch with impressive handling skills by the backs put the no 14 in the clear for a converted try. Spurred on by this Sutton had the better of the play for the rest of the half and their creative no 10 scored under the posts, converted his own try taking the half time score to Dorking 24 – 21 Sutton. The game was very much on and the large home crowd knew Dorking would have their work cut out playing up the slope.

Sutton started where they had left off and pinned Dorking down in their own half. Stout defence kept them out, and eventually Dorking’s forward power took them out of the ‘red zone’ and in to the Sutton half, where Finn Osborne, propelled by his team mates, crashed over for a proper forwards’ try, duly converted by Matt taking the score to Dorking 31- 21 Sutton.

Refusing to lie down, Sutton again pinned Dorking back in their 22, and again only robust defence kept the visitors at bay. Using the slope intelligently the Sutton half backs combined with the forwards to probe the Dorking defences, and Dorking were fortunate not to succumb as Sir adjudged the Sutton forwards guilty of sealing off, holding on and sundry offences known only to those on the pitch. However they were tiring a little and this allowed Captain Noble to break out pursued by Ryan Jeffery in support, resulting in a try for Ryan out wide on the left wing, not converted taking the score to Dorking 36 – 21 Sutton.

For the next ten minutes it was pretty even stuff with both teams locked in midfield conflict unable to break the deadlock until Sutton’s prop Tom Boaden took charge and crashed over from a short distance, try converted and the scores 36-28. From the kick off a similar pattern ensued, but this time with Dorking’s Fraser Macdonald crashing over for the final score with 5 minutes to go to seal the win, Dorking 43 – 28 Sutton.

Overall a great day – with the A and Ex A XV also playing Sutton and Epsom and loads of age group matches it was an experience that showed all that is good in rugby when two like-minded Clubs meet.

Thanks to all who made the day so special – there are so many but particular call outs to Ted Ivens for organising such a special event to name the Clubhouse and the memorable lunch afterwards. Also Nicky and the bar staff team – a huge day with so many thirsty customers and also thanks to all the volunteers who just make things happen from the pitch set up and clear up, BBQ’s, tuck shop and many, many other things. And finally, the players and coaching team for putting on a great performance across all the teams.


Dor Armand roux commented;
"It was great to get a W over Sutton and Epsom on a very special day for the club. It was a potential banana skin, but we knew we had to stick to process and the result will take care of itself. I feel the players have really developed over the last 3 years as they showed some great composure in critical moments which is something in these types of games that really matters.

Our defence in parts was simply incredible in parts of the game, but we have identified a few areas to go and work on. To be honest, I really just wanted the team to enjoy the Win by celebrating with everyone else on the night.

We will take stock this week and make sure we look after the bodies while focusing on the last block of games in 2021.