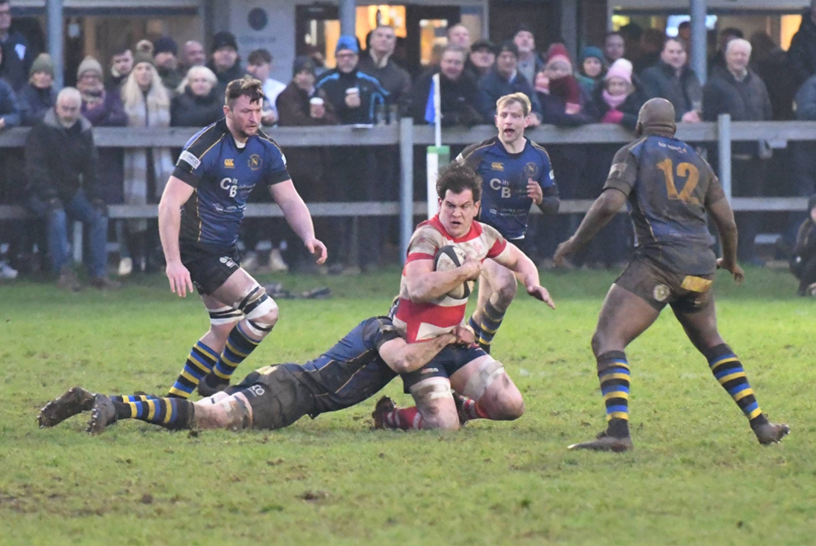 First vs Second in this tightest of leagues. At the final whistle the two top teams were in the same position albeit the points gap reduced from 8 to 4 with Sevenoaks and North Walsham snapping at the heels. Not even a losing bonus point to stem the seemingly inexorable closing of the gap.

Wimbledon - who have been in every pundits last two come the end of the season - appear to have lost much momentum having also lost away to Westcombe Park. Who, interestingly, are our next opponents.

On to the game itself. Firstly well done Hertford - a well deserved win. The first half was all Hertford and what little ball Dorking had was often squandered in the most uncharacteristic fashion for a side renowned for pace and deft handling. I can’t remember so many dropped passes, knock-ons and indecisiveness. Inevitable madam with the whistle pinged at probably a 4 to 1 ration in Hertford’s favour. When you’re on the back foot....

First blood to Hertford after a well placed chip to Dorking’s in goal with catch and grounding. Conversion missed. There were occasional forays into the Hertford half by Dorking and a shot at goal for a penalty had the legs but drifted wide. Dorking's line out was another area of concern - we were not only losing possession in open play but also at our set piece. In fairness Hertford's middle jumper was adept at dislodging possession in a robust display of aggressive line-out attack. Well if you can get away with it, why not? The scrum - for the last 3 or 4 games has been outstanding but on this occasion completely neutralised. We even got driven off our own ball.

Second score to Hertford through the midfield with the very fast Hertford 1 leading the charge and with excellent handling and support offloading to Hertford 6 to score by the posts.  Easy conversion.

Other than a missed shot at goal from a penalty awarded to Hertford that ended the first half 12-0.

Second half and Dorking - with the slope in their favour - came out with a much more positive attitude. The line out at last started to function and there was more vim and vigour from the back row and centre/wing/full back combination. However, as in the first half, silly handling errors and just not having the support immediately available checked the momentum at the crucial moment. Then, against the run of play Hertford broke through the midfield in an almost identical attack with excellent offloading to the support players. Again the dynamic Hertford 1 in on the action this time to score a fine try close to the Dorking posts for an easy conversion. That was the only incursion by Hertford into Dorking’s half for the rest of the game.

The Dorking side started at last to put in some good attacking combinations and Cam Cowell’s grubber put Fraser Moseley in for a fine try at the 65 minute mark. A difficult conversion missed for the score to stand at 19 - 5. Game on perhaps? Then much pressure from Dorking led to a number of line outs on the Hertford 5 metre mark and a yellow to Hertford 5 for collapsing a driving maul. A further collapse of the ensuing catch and drive should by rights have been another yellow. However, the penalty was again kicked to the 5 metre mark, throw-in caught and the ensuing drive was good for a try by James Catton at 78 minutes. Conversion missed and the bonus point with it.

So that was that - no great escape. A rejuvenated Westcombe Park visit next Saturday and, if we are to keep our promotion hopes on track, a most robust response to Saturday’s disappointment is absolutely vital.

DoR Armand had the following to say:

"Dissapointed with our performance today, but cant faul the players for all the effort they put into that. It was a game where we lacked possession and when we had it, we just did not keep hold of the ball.

We did not exit our half very well either so credit to Hertford for applying pressure and focing some uncharacteristic mistakes from the players.