Our guest of honour on Saturday - and we were thrilled that he agreed to visit us - was Peter Wheeler. Peter is the current RFU President. One of the greatest hookers of all time - Peter played over 350 games for Leicester, was capped 48 times for England, including 5 as captain; and was a British Lion in 1977 and 1980.

He was a "fearsome opponent" and Dorking RFC President, Humfrey Malins should know! It was nearly 50 years ago that he gave our Humfrey a few hooking lessons, in a game of that he remembers well - Leicester won, Peter Wheeler won the tight head count in the scrums, and some were confused as Leicester had letters not numbers on their shirts!

The game featured a star-studded cast on both sides... In addition to Peter’s impressive credentials, Rodger Arneil, the Leicester wing forward that day was a Scottish International and Lion.

From Richmond, Tony Bucknall went on to win 10 England caps, including one as captain, and Chris Ralston was capped 22 times for England and was a British Lion in 1974.

It seems that Dorking RFC was in force that day, as not only Humfrey - Richmond’s regular first choice hooker, took to the pitch, but also Peter Moore, ex Dorking RFC captain, was in the centre for Richmond that day.

Peter Wheeler began his rugby aged 12 at Brockley County School in South London. At the age of 26, he made his England debut as hooker, going on to gain a total of 41 caps. He played in the front row for England’s 1980 Grand Slam, and five times as England captain, including beating New Zealand 6- 3 in 1983, having captained the Midlands Division team which beat them 19-13 only 11 days earlier. He went on both the 1977 British & Irish Lions tour to New Zealand and the 1980 tour to South Africa.

In 1971 he was on an England uncapped tour to the Far East, as part of the RFU’s centenary celebrations. The first match was against Japan at the Kintetsu Hanazono Rugby Stadium, in Osaka, in front of a crowd of 13,000. The second was at the Chichibunomiya Rugby Stadium in Tokyo with 25,000 fans there. Other tour matches were in Hong Kong, Singapore and Sri Lanka.

In 1974 he scored a hat-trick of tries on his Barbarian debut against the East Midlands in the Mobbs Memorial Match and went on to play 17 times for the club. In 1976 he captained the side against Saskatchewan on the Baa-Baas tour of Canada and in 1981 was a member of the Barbarians squad that won the Hong Kong Sevens, playing alongside Clive Woodward and Andy Ripley.

Peter captained Leicester Tigers to three consecutive wins in the John Player Cup from 1979 to 81 and played 349 games for the club from 1969 to 1985. A leading supporter of league rugby, he coached Tigers in the inaugural league season of 1987, when they became champions. He then joined the Tigers organising committee, having coached Oxford for the Varsity Match.

When the game went professional in 1996, he became Leicester Tigers Chief Executive, remaining in that role until 2010. He was then Tigers’ Rugby Director until he retired in 2015, becoming a life member after serving the club for more than 40 years as captain, coach, CEO and President.

Peter was inducted into the Premiership Rugby Hall of Fame for his contribution to the professional club game and his role in the game’s development through his work with Tigers, Premiership Rugby, the Rugby Football Union and the Professional Game Board.

He and his wife Margaret have three sons and a daughter, all of whom have played rugby union. 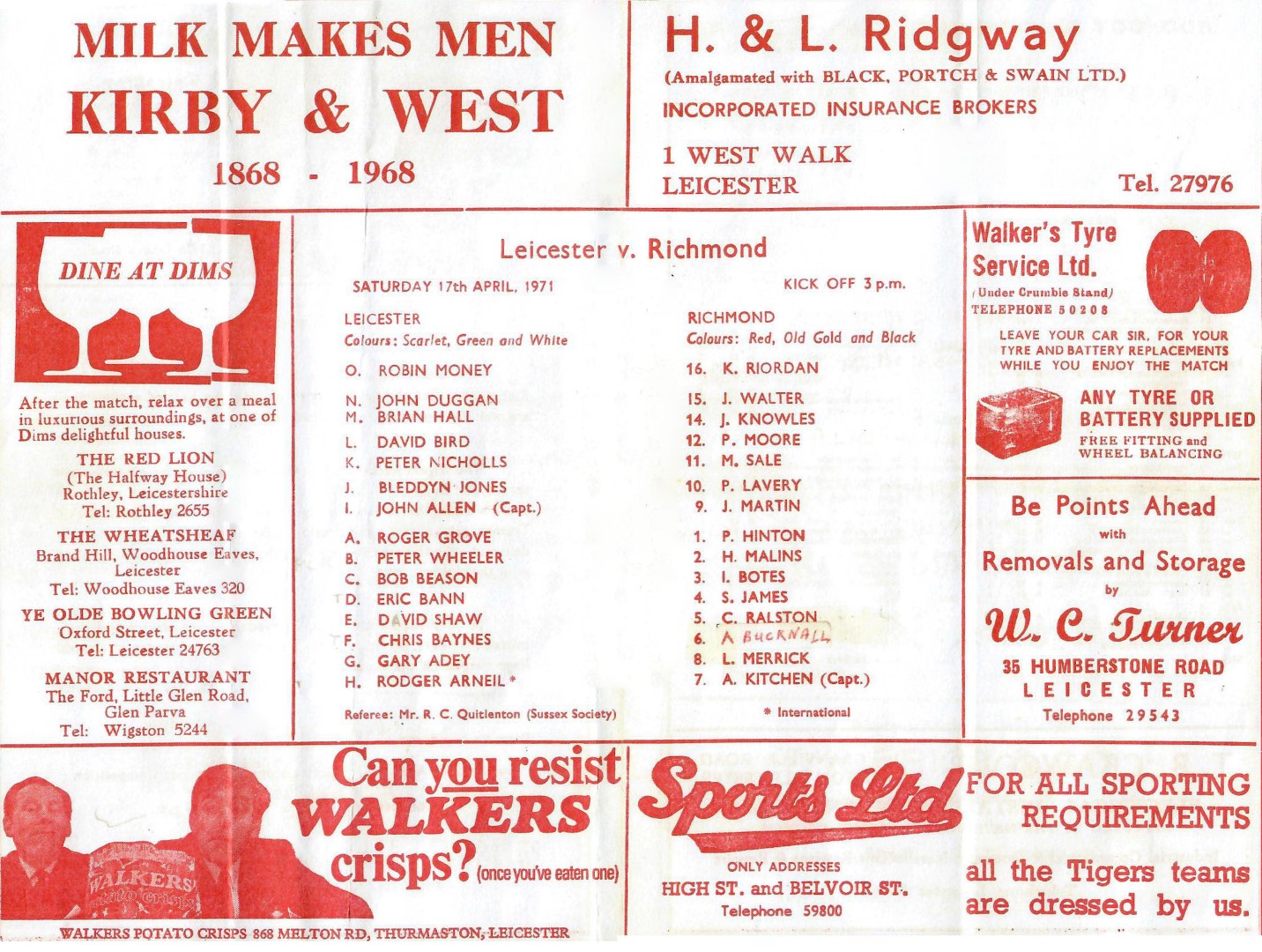