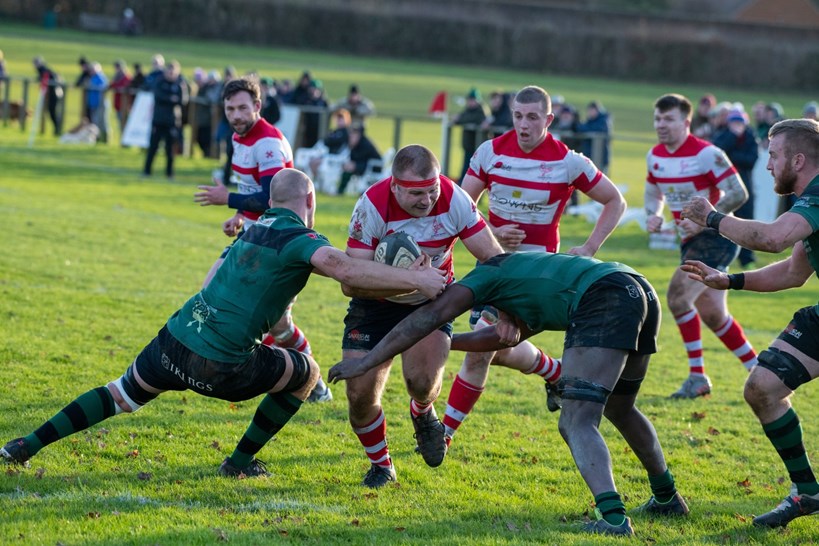 It has been ten years since North Walsham visited The Big Field, and in the four times the clubs had met previously, Dorking had run our winners each time by single digit points. A lot has changed at both clubs in the intervening years, and as the afternoon unfolded it looked as if the points difference would be similar, but with the victor’s laurels very much in the balance.

With the Red & Whites slipping up at Sevenoaks and North Walsham edging out Wimbledon the previous weekend, it was 1st v 2nd in the league and all to play for. Talk around the lunchtime tables centred on (apart from what a fine spread had been laid on by new Chef Robert Foster) the traditional power of the Norfolk lads up front and would the Dorking pack be able to hold them.

Captain Noble opted to play uphill in the first half, and North Walsham kicked off downhill with the wind slightly to their backs and the sun in their faces. The first fifteen minutes saw consistent pressure applied by North Walsham who kept Dorking pinned down in their own half; mostly inside the 10m line to be precise. The set piece scrums seemed pretty even, although Sir saw fit to penalise the Dorking tight head Charlie Connor a couple of times for boring in when it looked like the Red & Whites were gaining the upper hand. The deadlock was broken on the 6 minute mark as the North Walsham fly half Matt Hodgson slotted his first penalty of the afternoon, 0-3, and the re start allowed Dorking a rare foray into the top half of the pitch. With both sides playing expansive rugby and both lineouts functioning well neither side was able to gain sustained advantage and play remained frustratingly, but nonetheless entertainingly in the midfield. North Walsham probably had the better of the exchanges with both wingers having chances snuffed out by last ditch cover tackles.

An injury to the North Walsham scrum half forced a reshuffle in their back line and taking advantage of this Dorking drove up field forcing them into defensive mode and ceding an attacking lineout on the 5m line, from which the Dorking 8 Finn Osborne was able to drive over for the first try of the afternoon. With the conversion into the wind missed, it was Dorking 5 – 3 North Walsham.

And as is so often the case, immediately after receiving the re start kick, Dorking were adjudged to have infringed at the break down affording Matt Hodgson a fairly straightforward 25 metre shot at goal. 5-6 to North Walsham in what was becoming a very interesting competition. With a slight ascendency in the set piece scrum and a couple of scrum penalties in their favour, it was Dorking’s turn to apply the pressure. Awarded a penalty 5 metres out, they opted for a scrum and in the ensuing drive, flanker Daragh Chambers touched the ball down for the Red & White’s second try of the afternoon. The conversion, into the teeth of the wind was missed. Dorking 10 – 6 North Walsham.

That same wind was to benefit Dorking as at the re-start North Walsham kicked long and the ball bounced over the dead ball line giving Dorking a set piece scrum on the half way line. Failing to capitalise on the possession, a stray ‘nothing’ pass put the back line under pressure with a knock on giving North Walsham a scrum on the Dorking 22 right in front of the posts. With the scrum wheeling, Dorking were deemed guilty of some unseen offence, and the penalty was gratefully accepted and slotted over, making the score Dorking 10 – 9 North Walsham at half time.

With Jonny Aiken leaving the field shortly before half time, and Fraser Macdonald replaced at half time the Dorking back line looked a little unfamiliar as the teams lined up to start the second half. Utilising the slope and the wind, along with what was now becoming superiority in the set piece Dorking forced a penalty on half way, moved a further 10 meters closer to the uprights as a result of some back chat. Feeling that he might perhaps have left his kicking boots at home, Captain Noble handed the tee to Killian Wilson, who duly bisected the posts. 13-9.

Receiving the re-start kick, Dorking turned up the pressure and camped on the North Walsham try line. Successive pick and drives forced a defensive error in the robust defensive set and opting for a scrum, Dorking drove towards the line hoping for a repeat of the first half. As the scrum went down Sir called a halt to proceedings, and after some discussion with the North Walsham captain awarded a penalty try to Dorking and a yellow card to the NW hooker. 20-9.

Despite being down to 14 men North Walsham rallied strongly unleashing their back line and in particular the strong running James Riley on the wing who had looked dangerous on the few occasions that he received the ball. Strong Dorking defence, in particular some fine tackling from locks Jasper King and Steve Howorth and flanker Fred Dalton kept the green hordes at bay, but an offside infringement gave them a further shot at goal. 20-12.

With parity of numbers restored, a further 15 minutes of stalemate ensued with promising attacking moves from both sides snuffed out by stout defence, the odd knock on and a few offsides. Even Sir got involved at one point catching a rifled pass from the North Walsham 9, returning Lazarus like from what seemed a game ending injury in the first half, square in the back. Dorking stole the ball at the ensuing scrum, but almost immediately turned it over at the next ruck. The deadlock was finally broken as North Walsham Winger Riley scored a well worked try after successive back moves created the space for him to dive over by the corner flag. Conversion, into the wind missed and the scores were 20-17.

With Callum Watson replacing Jonny Ellis at 2, Dorking were looking to close out the game in the final 20 minutes. A penalty within easy kicking range of Mr Wilson’s boot was spurned in favour of a set scrum, but a fumble at the pick-up turned the ball over to North Walsham who cleared their lines. A further penalty in a similar position some minutes later was, to the relief of the Dorking supporters kicked, taking the score to a more comfortable 23-17.

With the sun disappearing behind Leith Hill and only a few minutes left on the clock, Dorking received the re -start kick and drove downfield to the half way line where Sir adjudged the NW tackler hadn’t rolled away quickly enough and awarded Dorking a penalty. From the ensuing attacking line out deep in the 22 Dorking kept the ball for a couple of phases before Captain Noble, after checking with Sir that time was up, ended the game by kicking to touch, much to the relief of the Dorking spectators, and I suspect the 36 tired players who had given their all in a thoroughly entertaining 80 minutes.

Next week sees Dorking travel the few miles up the A24 to Wimbledon; another stern test where recent games have been very close, so all support welcomed - It’s got to be better than going Christmas Shopping.

“I’m very pleased with the result today and the guys had to show some real character after the disappointment over at Sevenoaks last weekend.

There are a few areas we need to go away and look at in the week, but we need to really enjoy the moments when we turn up and deliver a gutsy performance like that.

Credit must go to North Walsham who gave us a tough time, but in the end, it was down to our pack to guide us to victory in what was a class display at set piece from the Dorking forwards.