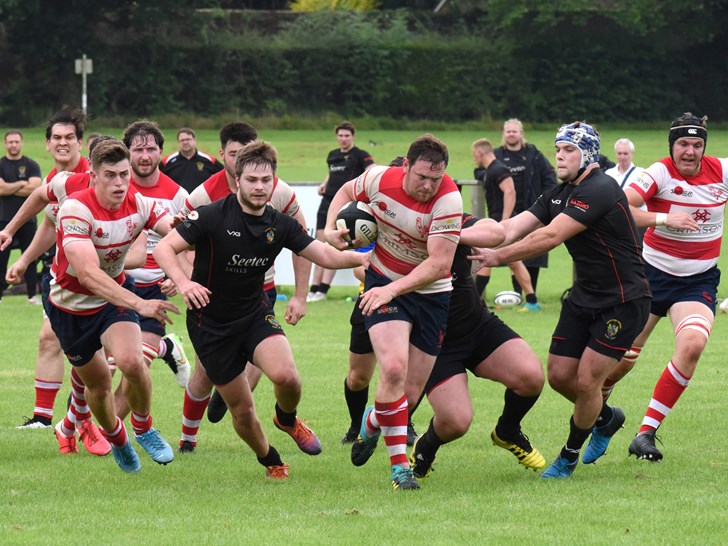 After the 24 - 0 victory over Camberley the previous week, Dorking made a few changes which allowed some players a well deserved opportunity to play for the 1st team.

Rochford Hundred, who recently got promoted to National 2 South were in good form after a victory over Tring in a previous pre-season encounter and losing to Nat 1 side Cambridge.

The game started with Dorking putting immediate pressure on Rochford’s pack who knocked the ball on in the first maul from the restart.

The subsequent scrum saw Henry Smith score a try which he even contemplated retiring on. After collecting a wet ball that shot out of the back of the scrum, it looked like he had no where to go.  He then deftly used his left boot to chip the ball over both packs and a couple of opposing players. It was at this point that Smithy had a foot race with their 15 which Smithy won by plucking the ball out of the air after 1 bounce and dived over the line. He was swamped with congratulation by his team and Killian kicked the conversion. 7-0.

The rest of the first half was a real battle. Not only were both teams set on playing in the right areas, but the contact zone was fiercely contested with Dorking’s defence standing out as they were driving back any potential threat.

Dorking’s tempo gave them some great opportunities but unfortunately they squandered a few with the biggest one being when prop, Charlie Connor, made a clean break after a failed chip by hooker, Jonny Ellis. Jasper King was in open field, but Charlie finding himself in unfamiliar territory, took the ball into contact.

Dorking visited Rochford's 22 on a few occasions, but were met with stern defence and a few unforced errors meant Dorking could not add to their early try. The half time whistle went and the boys jogged into the changing for a debrief.

Dorking made a few half time changes to get fresh legs on the park, and it paid off again early in the second half.

Dorking had a Lineout 7m out from the Rochford try line. After a few struggling near miss lineouts in the first half, Dorking managed to hit Jasper King at the tail and set up for a very impressive driving maul. Hooker Jonny Ellis got the score and Killian converted expertly from the touchline. 14-0.

Rochford now began to get back into the game with some clever play and when they got close to the Dorking try line, they expertly managed their slow ball play to squeak over for a converted try. 14-7.

Dorking again visited the Rochford 22 and were really turning up the tempo only to be let down with a last pass not going to hand or a lineout not going to plan. Captain Fred Dalton decided to take the 3 points on offer taking Dorking 10 points clear. What a clever decision this was. Cameron Cowell, stepped up and popped it over. 17-7.

Dorking cleared the bench with every player of the 22 man squad contributing positively which was fantastic to see.

Rochford started putting pressure back on Dorking, and even though the Dorking defence was very good on the day, they could not deny Rochford scoring on full time by managing a close quarter battle and then moving it into space. 17-14.

There is definitely a new level of desire and energy from this Dorking team and DoR Armand Roux had the following to say:

“I’m pleased with the win today, but we left a few tries out there which was slightly disappointing.

Rochford definitely brought the expected physicality, but we were up to the task by focusing on our application and not giving them too much time.

Considering the league Rochford will be in next year, I thought it was a good reflection for how far we have come in recent times. This group of players have got a real buzz about them and they have worked very hard for each other over the last few months.