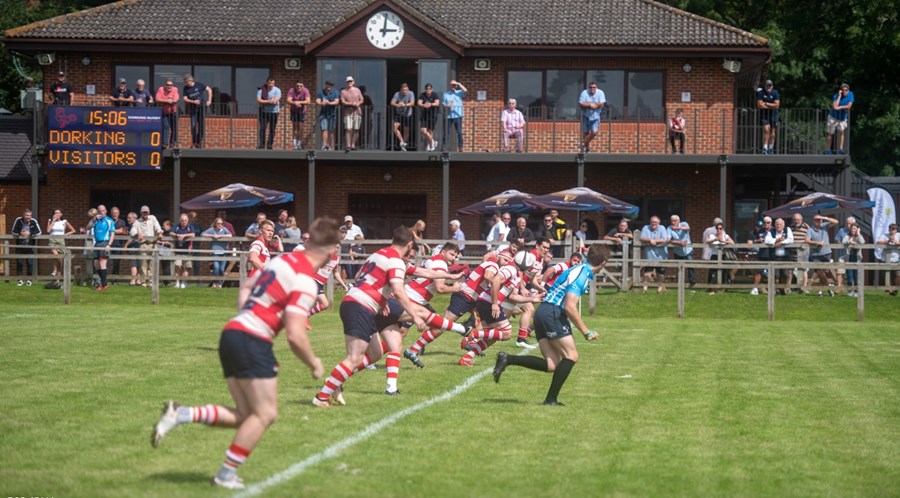 It has felt like an eternity since we last took to The Big Field for some proper rugby, and what a day to finally see our men in Red, White and Blue take to the field again. The roaring support of a packed balcony was fantastic as Dorking started playing down the hill.

The game began at a high tempo in the August Sun, with both sides really looking to impose themselves in both attack and defence. Some new faces also contributed to a lot of energy both sides of the ball and what a great afternoon to play your first game for the Dorking family.

It did not take long before Tom Bristow earned the Dorking team a scrum penalty to allow skipper, Matt Noble, to kick the ball deep into Camberley territory and put some pressure on the visitors.

After a couple of phases spreading the Camberley men wide, Fraser Macdonald found his centre partner, Ryan Jeffery, in space who executed a pass under pressure to left wing, Dan Riches, who had to put on the after burners to get around the cover defence and score under the posts. 7-0

After collecting the restart and a perfectly executed exit play where Gregor Ramage always seemed to be making ground, the Dorking men again found themselves with possession just inside the Camberley half. Matt Noble decided to test the Camberley 15 with a nicely weighted up and under. He fumbled, Jeffery got his boot to ball, and within 5 minutes, Dan Riches got his second score by picking up the ball and diving over.

At this point of the game, Dorking’s set piece was really performing well and the backs were starting to find some space both in close and out wide. Camberley were scrambling very well in defence, but the pressure started to mount.

25min in, and the Dorking men had a lineout inside Camberley’s 22. Smithy moved the ball out to the backs with a well-executed 1st phase strike, Matt Noble found Cam Cowell in space who put on his jet shoes to execute a 2v1 for Dorking’s finest, Fraser Mosley, to score in the corner.  17-0

Immediately after the restart, Steve Howorth, who was having a very productive afternoon in the pack, managed to find Finn Osborne in space. Finn managed to travel around 60 metres down the hill beating a few defenders only to be dragged down short from the try line. The knee was clearly back to full strength and the flying gazelle was back!

The set pieces remained a tightly contested affair with both sides managing to retain possession from them.

Just before halftime, skillful Jonny Ellis gathered a loose ball and played in Ryan Jeffery with a blind pop to his right. Ryan at this point, 40 metres out traveled with Fraser Mosley on his outside shoulder only to throw the most outrageous dummy and make his way through untouched to score Dorking’s 4th try. 24-0 and we went into halftime.

The second half saw James Catton and Charlie Connor come on at props and these two really managed to apply some pressure at scrum time as the game went on.  Camberley, now playing down the hill, were starting to ask some serious questions of the defence and getting close a few times only to be stopped by some great defence by Dorking. Second row Will Galbraith also joined the action in place of Steve Howorth.

Dorking then brought on 18-year old’s Will King, Finn Rennles and Toby Arnett who all managed to give a very good account of themselves. Not only in attack but also importantly in defence. Evergreen Mike Terelak also joined the action with 19 year old scrumhalf, Ben Mackenzie, also being rewarded with some game time replacing Henry Smith who had a busy afternoon.

Both teams managed to put some great phases together and credit to Camberley for playing some very exciting and attractive rugby. Unfortunately, the last pass seemed to elude both sides from scoring any points in the second half.

Dorking were proud of the fact that they did not concede even after making changes to our starting team and this was a testament to this group’s desire and work ethic.

All in all, a successful afternoon and stepping stone towards Rochford Hundred on the 21st August.

DoR Armand Roux had the following to day

“I’m was really pleased that the guys could just get out there and play some rugby with smiles on their faces today. Especially in front of the new and improved clubhouse and the Dorking voices in full flow.

Yes, we made mistakes and yes, we need to go away and work on some bits. It has been 18 months, it was very hot and the boys all needed this blow out so we can build towards our 21/22 season”